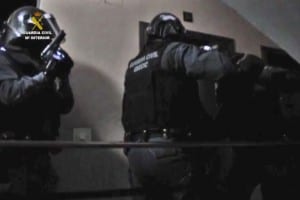 FOUR terror suspects have been arrested in Madrid following intelligence from British spies in Gibraltar.

The gang was rumbled after security services on the Rock saw thousands of propaganda messages.

The group was using internet chat rooms and messaging apps to recruit Islamic radicals to carry out deadly attacks along the costas this summer.

Intelligence chiefs were concerned the gang had already gained a following of ‘hundreds of people’.

Three of four men arrested in raids in Ciempzuelos and Pinto in Madrid were of Moroccan descent while one was Spanish – all four remain remain in custody.

The 40-year-old Spaniard is a director of Lee Hecht Harrison-Spain, a subsidiary of human resources firm Adecco.

Investigators are concerned that the cell may have used the company’s database to make contact with thousands of muslims.

It is the second time in two weeks that Gibraltar GCHQ’s intelligence has led to ISIS related arrests.

Previously, the GCHQ listening post on the Rock picked up intel from North Africa and the eastern Mediterranean.

The intelligence raised fears of high scale attacks along Spain’s Costas, and another Moroccan suspect was arrested in Majorca.