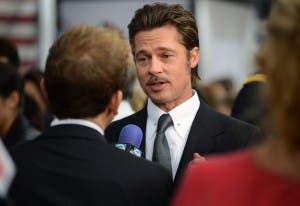 HOLLYWOOD royalty Brad Pitt was spotted filming in Spain over the weekend.

The 52-year-old actor waved to photographers on the way to his set in Las Palmas, donning a white suit and black and gold shades.

But things turn sour when he suspects she may be a Nazi spy and he has to investigate her.

The film is penned to hit screens November 23.