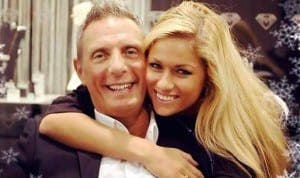 THE former swimwear model accused of killing her ex-boyfriend in Estepona broke down in court as she vehemently denied the charges.

Mayka Marica Kukucova, is accused of shooting her British born jeweller ex Andrew Bush at his Estepona home in April 2014.

Prosecutors are seeking a 20-year-sentence, arguing that she shot him three times in a jealous rage when he arrived home with his new Russian girlfriend, Maria Korotaeva, only a few months after they had split.

Kukucova´s defence inisist she was acting in self defence, claiming he accosted her with the gun, and that it went off during the ensuing struggle.

“I didn’t want to cause him any harm,” Kukucova said, sniffling and holding back tears.

“The gun just went off. I just wanted to break free from his grasp.”

New girlfriend at the time Ms Korotaeva alleges she was hiding in Mr Bush´s Hummer car while the altercation unfolded, and that after the gunshots were fired, Slovakian Kukucova forced her out of the vehicle so she could make her escape.

She described her as ´crazy´ with jealousy.

Gold dealer Bush, aka Mr Bling of Marbella, was found dead in a pool of blood at his five-bedroom villa in the early hours of the next morning.

Kukucova has been held in Spanish jail since she was detained in Slovakia following the shooting.

Local prosecutor Jose Antonio Nieblas said in a report submitted to the judge before the trial: “The accused, moved by the unmistakable desire to end Andrew Bush’s life and at a certain point in a row they were having, made a sudden and unexpected use of the .38 special-model Amadeo Rossi revolver that she was carrying.

“She shot Andrew Bush three times, the first shot hitting him in the arm and the other two in the head.

“Andrew Bush had no chance to react or defend himself against the unexpected and unpredictable attack which caused his death.

“In an attempt to procure her impunity, the accused placed the revolver in the dead man’s left hand, took the keys to his Hummer and left the house making sure she closed the doors and impeded immediate access from outside.

“Following that she fled in the vehicle after a heated argument with Maria Korotaeva.”

The trial at the Ciudad de la Justicia in Malaga continues.

Alex Trelinski - 16 Aug, 2022 @ 12:02
THE massive fire in the Vall d'Ebo area of Alicante Province is reportedly still 'very active' on Tuesday morning. It's the biggest blaze in a...