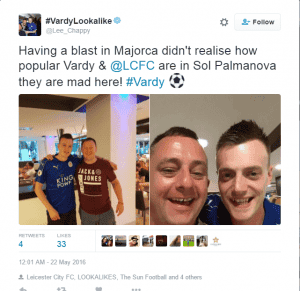 THE doppleganger of Leicester City striker Jamie Vardy is being swamped by fans in Magaluf.

Lee Chapman, who met the England forward on the Leicester team bus, is now earning £200-a-hour for impersonating the Foxes star.

When Vardy met his lookalike he reportedly called him a “full kit w****r” before posing for pictures with him.

Royal Mail have now given Lee six months off work so he can travel around the world impersonating the Leicester striker.

He says he didn´t realise how popular Vardy and Leicester City would be in Spain, saying they are “mad over there.”

Fans have been posting photos on social media of them posing with Lee clad in a full Leicester kit.