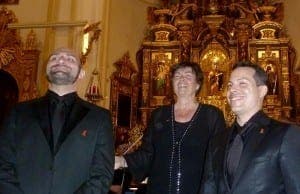 A PERFORMANCE by the choir and orchestra of Collegium Musicum with the Camerata Singers of Puccini’s joyous Messa di Gloria under the baton of the ebullient Annemarie Philipps with Philip Borg tenor and Luis Lopez Navarro bass-baritone can only be described as triumphant, so much so that, possibly because of the climactic ending to the Gloria, the audience gave an spontaneous burst of applause before the Credo.

The eighty or so choristers were in fine voice, and both of the soloist gave an immaculate and touching rendering of what must be the first major oratorio of the 18 year old Puccini.

The evening began with Saint-Saens Morceau de Concert op.94 with Alexander Mutafchiev, on French horn, whos playing evoked memories of Dennis Brain that superb exponent of this, the most difficult of instruments to master. So well done that man.

The whole of this took place in the Iglesia de la Encarnacion in Marbella and was the second of three performances, the last of which is to take place at the Iglesia Nuestra Senora de la Merced in Sotogrande on 5 June at 8pm.

The very appreciative audience insisted on an encore that was given by choir, orchestra and soloist to further cheers. I find that Annamarie’s concerts are so uplifting and they always leave me, and I suspect many others, with happiness in my heart and a smile on my face. So to you Annamarie and all who took part – thank you – thank you – thank you!

Collegium Musicum are always looking for new instrumentalists and choristers.