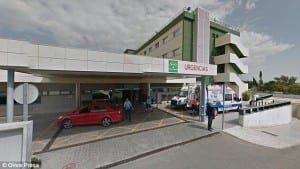 A TEENAGER is lucky to be alive after having his throat slit at his end of year prom.

The school leaver was rushed to the Regional Hospital of Axarquia after losing ‘litres of blood’.

The wound only missed the victim’s carotid artery by two centimetres.

Witnesses say an altercation arose after the victim accidentally brushed the arm of the 18-year-old assailant while dancing.

A teacher who witnessed the incident said the attacker then challenged the victim to a fight.

CCTV footage shows the 17-year-old being pushed and shoved.

The attacker is then seen looking into the camera before allegedly carrying out the attack out of view.

A waiter rushed to the victim’s aid and used his shirt to apply pressure to the wound, keeping him alive until the ambulance arrived.

The assailant fled the scene on a motorbike but has now been issued a restraining order and charged with causing serious bodily harm.