“AFTER my wife died I spent three years travelling the world to find the perfect place to spend the rest of my life,” explains Bob Bainbridge, who moved to Benalmadena three months ago. “And there is something very special about this town, something undeniably different.”

He isn’t kidding. We’re on a sleepy back road in Benalmadena pueblo, heading towards a enormous gold monument glinting spectacularly in the midday sun that happens to be the biggest Buddhist temple in Europe.

A whopping 33 metres high, it was the final project of Buddhist master Lopon Tsechu Rinpoche, who was so smitten by Benalmadena’s multi-cultural mix that he built the stupa in 2003 in its honour.

“The sense of calm and community feeling here is very strong,” continues Bob, who had quickly volunteered to become my self-appointed guide for the day.

Touchingly, friendly Bob cut short his cana to give me a personal escort around the village, chucking in his abridged life story for free.

Strolling around in surfer flip flops, with long grey hair, he is the very epitome of the sort of laid back, cultured travellers who would have first arrived in the village in the 1960s.

Up here, in the hills, it is a very different feel to the heaving tourist meccas of Benalmadena costa, Torremolinos and Fuengirola far down below.

The cluster of white houses sit at 280m and count on lovely sea views and a sense of green space and hills.

“You’re close to the action but not in the thick of it, and there are some really good people here, not to mention great bars,” enthuses 66-year-old widower Bob, a retired electrician from York whose new home overlooks the stupa.

As the temple represents peace, prosperity and harmony it’s good feng shui although not something Bob considered at the time.

It’s also only one of Benalmadena’s many curiosities that intrigue all-comers.

Enchanting Colomares Castle is another – an ornate palace built in 1992 by a certain doctor Esteban Martin in honour of Christopher Columbus – go figure.

Without a single architectural qualification to his credit he did a stunning job with this unlikely Gothic hillside structure whose ornate towers and spires rise skyward like a fairytale illustration. Once used for falconry shows until locals complained about the birds preying on their cats, everyone loves it for its Hans Andersen vibe.

And while you’re up here, don’t miss the Mariposario – another extraordinary attraction housing 1,500 exotically-coloured butterflies.

The pueblo is a bijou gem of gourmet tapas bars clustered along narrow alleyways that emerge into picturesque floral squares.

It’s not just Brits who flock to this enclave. Teresa Garcia, on holiday with her doctor daughter and adorable baby grandson from Madrid, waxes lyrical as they look out over the ocean from Colomares castle, getting to geographical grips with Benalmadena’s triple decker topography that epitomises the something-for-everyone cliché – from feathered vultures wheeling skyward to fodder for culture vultures down at sea level, where we can spot Moorish-inspired Bil Bil Castle, host to countless modern art expos and concerts.

Bil Bil recalls the age when Muslim foreigners invaded these shores and brought huge prosperity to the pueblo in the hills where Benalmadena’s story began.

The Moors developed agriculture, introducing sugar cane, figs, grapes and mulberry trees from the East during the 11th century, when the local population was concentrated within the pretty walled town.

But that’s another story. Mine continues downhill to Arroyo de la Miel, jutting out like a balcony between the sky above and the sea below. This is Benalmadena’s sharp end where the real business of shopping, working and living gets done.

It’s also home to one of the resort’s most enduring family attractions – Tivoli World, open every day in June from 4pm to midnight and in July and August from 5.30pm-1.30am.

From here, via the iconic Teleferico cable car, you can go up or down. Once you get used to seeing sea, and not snow, beneath your swaying cabin you can appreciate being lifted up to the peak of Mount Calamorro, over the A-7 road, with spectacular views and live shows in summer.

If you prefer to walk to the bottom, take the route through stunning La Paloma park, a peaceful 200,000m2 urban oasis of greenery with shady lakeside walkways and a menagerie of surprising wildlife.

They say the Spanish embrace siesta culture and Benalmadena at 4pm presents strong evidence to support this.

But down the bottom of town I fall upon Irish bar El Chorrillo where the mainly British clientele are discussing Brexit over their pints of Guinness and G & Ts.

Iris Lawrence, 68, swapped south London for the south of Spain in her 40s, after a career as PA for one of BP oil’s top executives. She has some tales to tell.

Just like Bob, she came here on holiday to visit her friend Jill and ‘never really left’.

“It’s changed a lot here in 20 years with considerable development,” Iris relates, gesturing at old photographs of donkeys and traps in the street, taken just decades ago. “But I still love it here.”

Outside siesta time, breezy Benalmadena Costa is undoubtedly the beating heart of town with its bar-lined beach strip and pumping port.

Two glorious kilometres of seafront stretch between the ziggurat-shaped Benal Beach apartments and the swanky marina while 10km of coastline can deliver the perfect beach – rocky cove, sandy strip or nudist colony – whatever your whim.

Here you will also find the incredibly popular Sunset Beach Hotel, probably the coast’s most successful place to stay, balancing quality with value and rarely less than 80% full.

Sybarites and socialisers head for Calle Bonanza, where the Lounge Bar is the unofficial Guiri Army HQ but most visitors end up at the port, the jewel in the resort’s crown. 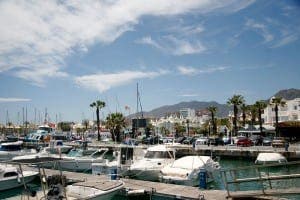 Winner of the ‘Best Marina in the World’ award more than once, it’s an all-white and more down-to-earth version of multicoloured Sotogrande Port, with pseudo-Moorish architecture and minaret domes suggesting Mr Whippy ice cream – and you can still get a 99 here.

Designer boutiques, bars and restaurants do a roaring trade, especially after dark when the waterfront twinkles with rainbow-coloured lights and the discos get going. 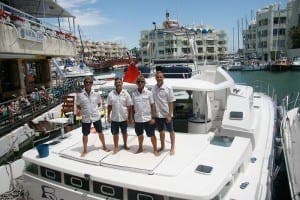 In my best Spanish I ask four handsome seadogs basking atop a luxury white catamaran in smart shirts if I can take their photo. Skipper Jason replies with an English ‘yes’.

This working Brit guarantees to show you dolphins Monday to Friday and his two-hour booze cruises top Tripadvisor’s list of outdoor pursuits in Benalmadena. 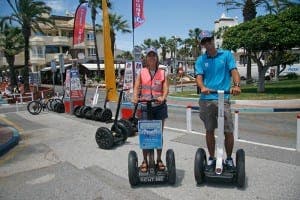 Just down the promenade, Laura Castillon can take you on a 10-minute Segway tour of the marina to give you a taste of these curious pogo sticks on wheels.

“I would say 70% of tourists here are Brits,” she reveals.

She continues: “I should add that the English always behave impeccably and we love working with you.” 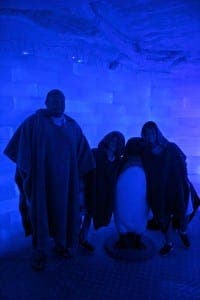 Essentially a walk-in fridge with blue walls, garish music and all revellers dressed in floor-length fur ponchos, if you’re seeking respite from the 40 degree heat, the Ice Bar has my full recommendation.

So don your furs – whether for an elegant, on-board soiree or a spell in the fridge bar – and strut your stuff until the wee small hours.

The pueblo will still be there to soothe your hangover and quench your thirst for peace and quiet tomorrow.