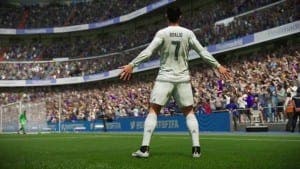 BUDDING gamers will have to opt for FIFA17 next season if they want to play as Ronaldo or Messi.

It means no teams or player from the Spanish league will be present in the PES game.

During the presentation, former Real Madrid, Liverpool and Valencia player Morientes showed that he is just as talented with a controller as he beat EA Sports marketing manager, Yeray Romera, in a FIFA17 match.