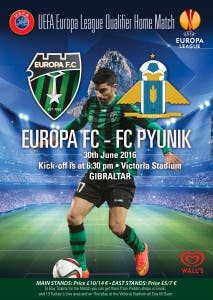 EUROPA FC begin their Europa League journey tonight when they take on Armenian side FC Pyunik.

Kicking off at 6.30pm at Victoria Park, the Gibraltarian outfit are rank outsiders with the bookies putting FC Pyunik at 2/7 favourites to win.

Despite the odds, Europa goalkeeper Matt Cafer is ‘relishing the challenge’.

“The mood in the home camp is a confident one,” the 21-year-old former Yeovil Town stopper told the Olive Press. “We can’t wait to kick off.”

FC Pyunik have sent a young side over to the Rock after finishing third in last season’s Armenia league.

A dangerous outfit, the side from Yerevan have won more league titles than any other side in Armenia.

Tickets for tonight’s game are still on sale, with a seat in the Main Stand just £10 and the East Stand as little as £5.

A 12 hour trip via Moscow lay in store for the men in green and black for the return leg on July 7.

If Europa and Lincoln Red Imps both progress to the next round of the Europa League and Champions League respectively, then next season’s third place team will qualify for the Europa League.