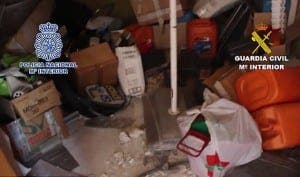 A BRITISH teen has been released after being held captive by his mentally unstable father for two years in Spain.

The 19-year-old was apparently freed after he was able to send an SOS to police from his computer after managing to bypass the parental controls his father had installed.

He emailed the police on atencionfamiliaymujer@policia.es saying: “Rescue. Assistance. Help me. I am desperate. My father abuses me. I am held prisoner. Please, do not get in touch with me because he would kill me.”
Witnesses say he weighed just six stone when he was carried away by the authorities in a blanket.

The teen, who is of Indian descent but has British nationality, was suffering from malnutrition, dehydration and disorientation.

He had been kept captive in the Rivas Vaciamadrid district of Madrid, where he is thought to have a suffered a torrent of physical and psychological abuse.

He claims he was beaten several times a day and given minute amounts of food and water. 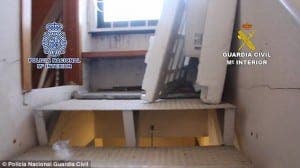 His father had installed bars on the windows and placed wood and scrap metal across the first floor of the property so he could not escape from the landing.

It is reported that the father believed neighbours were trying to poison them through their water supply and that he was the target of the Russian mafia.

Neighbours say there was so much rubbish in the house that it was infested with rats and cockroaches.

The father has been charged with a crime of illegal detention and ill-treatment in the family and was released on bail.