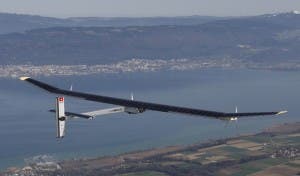 SOLAR Impulse 2, an entirely solar-powered plane, left from Sevilla to Cairo for the penultimate leg of its circumnavigational voyage.

The one-seat vessel has the wingspan of a Boeing 747 and the weight of an automobile.

On its trip, the revolutionary aircraft broke the record for the longest uninterrupted flight in history on its 118-hour journey from Japan to Hawaii.