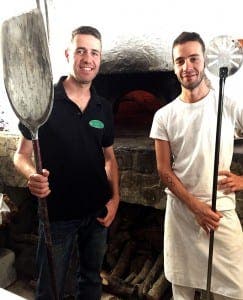 HAVING run his own food distribution company in Italy, he knows a few things about ingredients.

Aside from regularly importing the best cuts of meat and cheese from his mother country, he also has an amazing line of fresh produce, including delicious Vesuvio tomatoes from near Naples.

But Tarifa restaurateur Luciano Fabricio, 44, is now branching out into more creative ways of cooking.

After undertaking a course with Spanish masterchef Joan Roca, he has just introduced a ‘bano thermostat’ oven at his main restaurant Trattoria, where he is able to slow cook a leg of lamb or duck breast for up to 24 hours at a super low temperature.

“It leaves the meat far more tender and better quality,” he explains. “We are also doing a fabulous tender squid dish and I plan to introduce a lot more over the coming months.”

Brought up between Jordan and Nigeria, his father being an engineer, he has a worldly take on life and, thanks to an economics degree, is more than capable of running restaurants.

“Above all though, I believe in quality, which usually wins out in the end,” he explains.

He ended up in Tarifa, where he met his Spanish wife, while taking a break from his Milan-based food distribution company 15 years ago. “I just fell in love with her and the place and couldn’t bear to go back,” he explains.

Alex Trelinski - 30 Jan, 2023 @ 11:42
A mountain bike race in the Calpe area of Alicante Province produced added difficulties for a thousand competitors. They were participating on Sunday's final day...