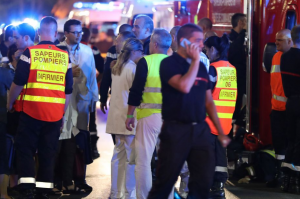 SPAIN has stepped up security on its border with France after the Nice terrorist attack which killed 84 people last night.

Acting Prime Minister Mariano Rajoy said during a televised address this morning: “We feel the pain as our own, we want to express our solidarity to our French neighbours and friends, we are at your side.”

He called Friday “a day of deep sorrow for all those who have lost their life and their liberty” in the Bastille Day attack.

He vowed to “work together with our partners and allies to end this criminal madness.”

There are no reports of Spanish victims, but Spain will fly official flags at half mast today government buildings will hold a minute’s silence at midday.

They will also hold an emergency terror threat meeting today to assess the risks to Spain following the attack, which saw a driver plough his truck through huge crowds that had gathered to watch the fireworks on Bastille Day.

There are reports that the driver was of Tunisian descent and that he shouted ‘Allahu Akbar’ as he drove in zig-zags through the crowds.