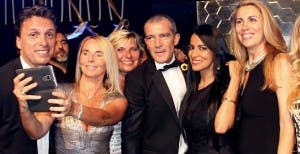 The Zorro star posed for photos with fans before hosting the annual auction.

Accompanied by girlfriend Nicole Kimpel for the second year running, Banderas’ visit will stand out as a highlight at the seventh edition of the festival.

The biggest sale of the night went to a Swiss businessman who splashed €40,000 on a Ford Mustang.

The festival runs until August 20 and has already featured the likes of Tom Jones and Robert Plant with British rockers Status Quo are scheduled to bring the curtain down.