THE EU has questioned Spain over the bleaching its seafood. 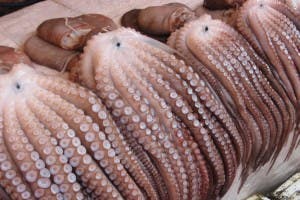 A Member of European Parliament has inquired whether or not the country has breached EU law by using hydrogen peroxide in the processing of seafood in a bid to make it seem fresher.

Spain authorised the practice in seafood such as squid, cuttlefish and octopus in 2011, with Italian authorities following suit.

But while hydrogen peroxide is authorised as a processing aid among EU countries, it is not allowed as a food additive.

If the substance remains in the final product, this would break EU laws.

Italian MEP Renata Briano wrote to the European commission that consumers had no way of knowing if their product had been bleached or not, and that both Italian and Spanish health authorities had failed to identify or label any health risks.

“How does the Commission intend to ensure that consumers and food-sector operators are able to make informed purchasing decisions?” She said, “Would it agree that, for transparency’s sake, the use of appearance-altering substances should be specified on labels?”

The Commission said in a blanket statement that all member states have been informed of the illegality of using hydrogen peroxide as an additive.

“All Member States agree with this interpretation,” it added.