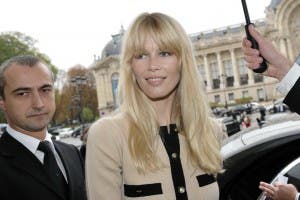 GERMAN supermodel Claudia Schiffer has been summoned by a Spanish court for allegedly chopping down her neighbour’s trees in Majorca.

Willi Weber, the former manager of F1 racing driver Michael Schumacher, is said to be suing Schiffer and her British husband, film producer Matthew Vaughn, after discovering the trees had been removed.

Weber claims a gardener acting on Schiffer’s orders cut the pine trees from his land on July 6 last year.

He says a specialist trespassed on his land after ignoring a warning to leave the trees alone and took them away with him after using a chainsaw to cut them down,
Schiffer’s gardener reportedly told a judge that he got a specialist to do the job after she told him to cut down the trees.

While giving evidence, the specialist is said to have admitted chopping them down “after Schiffer’s husband pointed them out to him from a distance.”

Mr Weber has said he plans to build a high wall between his home and his neighbour’s and bill them for the cost after what happened.

“Otherwise I will plant so many trees that they can only smell the sea,” he said.