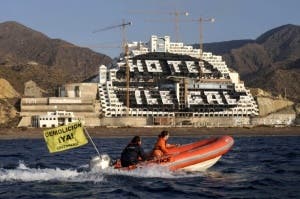 THE Junta de Andalucia are being urged to present Madrid with a detailed plan for the demolition of the controversial Algarrobico hotel, after months of stalling.

Podemos Andalucia is leading the criticism, claiming that the Junta and central government are playing a ‘tactical game of table tennis’ to delay demolition.

In March, the Supreme Court declared the Algarrobico Hotel illegal and ordered it to be torn down.

Since then, no demolition plan has been put in place and green groups and politicians are now putting pressure on the Junta to get a move on.

Greenpeace has been vocal in its criticism, calling the delay a ‘political smokescreen’.

And now, Almeria-based Podemos Andalucia deputy leader Lucia Ayala is heaping more pressure on the Junta, labelling the process as a ‘shameful spectacle’.

“A road map needs to be put in place, and now,” Ayala said. “The blame-game going back and forth from Madrid to the Junta needs to stop.”

She added: “It is time for the Junta to present a full roadmap detailing the demolition process.”

The government delegate in Andalusia, Antonio Sanz, has claimed that the Junta is working on a plan that will be ready to present in September.

The original date for the Junta’s plan was scheduled for July 27, when government and Junta officials met but failed to agree on a plan of action.