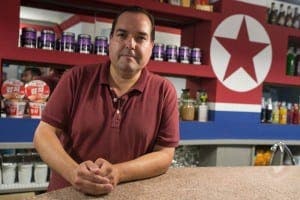 A CAFE dedicated to the regime of North Korean dictator Kim Jong-Un has opened in Spain.

Adorned with the country’s flags, Pyongyang Cafe, in Tarragona, serves Asian beers and tea typical from the reclusive state.

Propaganda is pinned on all its walls while guests can flick through the bookshelf of works by leaders of the Kim dynasty which have been translated into Spanish.

“North Korea is the world’s big unknown,” says Alejandro Cao de Benos, founder of the bar and president of the Korean Friendship Association, which has delegates in more than 30 countries and is officially recognised by Pyongyang.

“We want to break with all the myths, manipulation. And as not many people can go to Korea, because it’s complicated and far, they can come to our cafe.”

Alejandro has been the special delegate for international cultural relations for Pyongyang since 2002, and is the only Westerner to occupy a post in the North Korean regime, even if it is merely honorary.