THE world’s biggest chess tournament has once again been played in Spain. 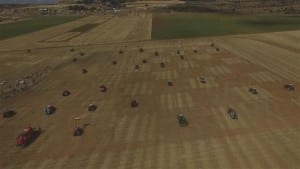 Hinojosa, a small village in the centre of the country, hosted its 5th annual mega match since the large-scale tournament began in 2012.

Instead of chess pieces and a board, tractors are moved around on a field mowed into a chessboard pattern.