SPAIN’S coastline will be 100% urbanised by the year 2267 if development continues at the same pace. 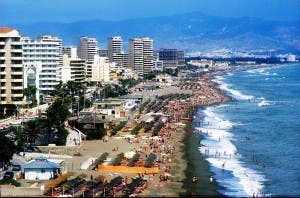 Some 7,898 kilometres of coastline has already been built on, over a quarter of the country’s seafront.

Since 1987, 22.7 km of front line coast has been urbanised every 12 months, according to a report in the Sustainability Observatory.

If development continues at the same pace then Spain’s entire coastline will be urbanised in 251 years time.

The Mediterranean and South Atlantic coastal areas are the most densely urbanised, with 3,829 kms of coastline already occupied.

The report also highlighted the increase in resident population on the coast, recording a 22.6% increase from 15 million people to 20 million over the past 20 years.