THOUSANDS of farmers in Murcia stopped traffic in angry protest over a seasonal drought.

The long running feud came to a head as the farmers rallied around the government headquarters, demanding water for their dehydrated and dying crops. 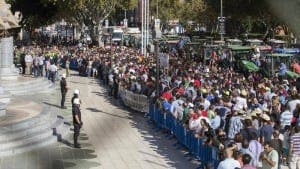 Murcia has seen a three-year period of little or no rainfall, with the recent storms hardly touching the region.

The protest began just moments before the president of the regional government Pedro Antonio Sanchez arrived.

Tensions have been rising as the farmers are pushing for Spain to legally declare a drought crisis, enabling them to use local drought wells and remove the imposed ban on water treatment in the countryside.

The anger has resulted in a second demonstration taking place in Murcia on September 27 and another in Madrid on October 13.