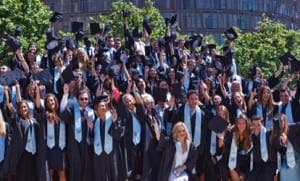 Overall Harvard was named the best university, with 15 of the top 20 universities based in the USA.

Since taking office in 2011, Spain’s education minister José Ignacio Wert has sought out an overhaul of the Spanish university system.

He has already pushed through legislation to put Spain’s universities ‘in line’ with the rest of Europe but has faced a backlash from students.

Last year, Wert was named as one of the least-liked members of the cabinet after a student strike coupled with criticism of top university chancellors.

In an effort to make Spain’s universities more appealing to international students, Wert pushed through a bill that will lower the duration of most undergraduate degrees from four years to three, bringing Spain close to practices across the rest of the EU.

In theory, the change will make it easier for young Spaniards to study abroad, and should also make Spanish universities more attractive for foreign students.

“We need to converge with Europe and improve the excellence of our universities,” Wert said. “We are currently isolated from the rest of Europe. We currently don’t recognise graduates from other countries with a three-year degree, even if they come from Cambridge.”