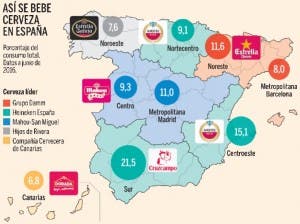 SOUTHERN Spaniards are the country’s biggest beer drinkers, a new survey has shown.

The report by Nielsen also showed Spaniards are fiercely loyal to local tipples.

A whopping 21.5% of all beer is drunk in Andalucía and Badajoz, with eastern regions Valencia, Murcia and Albacete consuming the second largest amount, 15.1%.

The northeast area, excluding Barcelona, accounts for 11.6% with the Catalan city itself washing down 8% of the total.

Boozers in the Madrid metropolitan area consume 11% of the overall total, with the more sparsely populated regions of Galicia and Asturias knocking back 7.6% of all ale.

The famous Spanish regional differences are clear in preferred brands, too.

Down south, it’s Cruzcampo for Andalucians, although Dutch beer Amstel is most popular in the east and around the Basque country and Rioja.