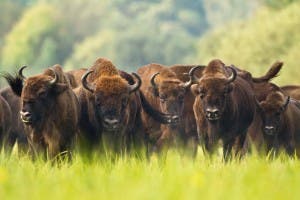 SPANISH police are investigating after an attack on a herd of recently reintroduced European bison left one decapitated and several poisoned.

Staff called police from the the Valdeserrillas reserve in Valencia on Friday after discovering the headless body of the dominant male.

They believe the herd was poisoned first so that their heads could be cut off and sold as trophies.

They are not sure when the attack happened but manager of the reserve Carlos Alamo said he knew something was wrong on Wednesday when the herd were in a different area than usual and ran away when he approached.

It was two days later when he found the decapitated remains of the male.

“He was a beautiful animal that weighed nearly 800kg,” said spokesman for the reserve Rodolfo Navarro, “He was sort of the symbol of the reserve.”

After finding no bullet casings in the area, the Seprona have taken samples from the male’s blood and fur to see whether he was poisoned with meat or water.

“We think that they took his head as a trophy … It must have been a gang because one person couldn’t commit this kind of brutality on their own,” Navarro added, “The police are investigating and it will be difficult, but we hope they get them.”

The herd of 12 had been brought to Spain from the Netherlands, Ireland and the UK as part of a European-wide programme to reintroduce the endangered species.

Navarro said the killings could threaten the reserve’s future.

“It was like a murder,” he said, “It’s just senseless and it’s really damaged not only our image and Valencia’s, but also Spain’s.”