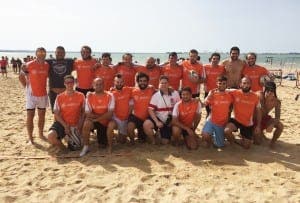 Taking place in the Cadiz seaside town of Puerto Real, local side the Watermelons hosted 10 teams including Ronda’s Los Bandoleros as well as Rugbeers from Cadiz and Sevilla, Hienas of Huelva, Madrid side the Politicians and Sevilla outfit Mercanarios.

The Madrid side run out overall winners, beating the Mercanarios in the final with the homeside beating Ronda’s Los Bandoleros in the third/ fourth playoff.

Tournament sponsor Dawn Hutchinson of ArayoWeb said the tournament was a resounding success.

“The beach rugby was a truly memorable occasion,” she said. “Thanks again to the Watermelons and the Ayuntamiento of Puerto Real for organising such a fun and professional event, which was also streamed live on YouTube for those who want to watch it.”