MARCH, 1967. And the most unique gig in Gibraltar’s history is about to get underway.

Brian Jones, his girlfriend Anita Pallenberg and British singer Marianne Faithfull have stopped off at the Rock en route to Tangier to escape rain-lashed London. 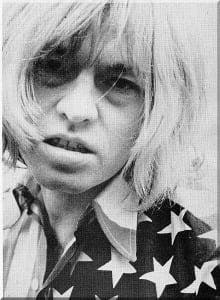 The Rolling Stones guitarist, mentally and physically debilitated from his reckless ingestion of LCD, has been busted out of his nursing home by the pair of rock and roll goddesses.

In the middle of a nervous breakdown, ravaged with pneumonia and clasping his asthma inhaler, Jones was in no fit state to board a plane. Faithfull and Pallenberg, meanwhile, had spent the night merrily dropping acid.

The in-flight menu onboard the private jet wasn’t for the fainthearted.

“We all got on the plane, at which point we shared our acid,” recalls Faithfull.

“Real smart. There was a stopover in Gibraltar. Brian was very excited about this.”

Jones’ poor health found little sympathy with Faithfull and Pallenberg, who thought his incessant wheezing was a ploy to attract sympathy rather than a clear sign of ill health.

In the pocket of Jones’s smart black and grey suit was a tape of the soundtrack he had composed for Pallenberg’s new film, A Degree Of Murder.

Short of an audience in Gibraltar, he turned to the Rock’s oldest colony of inhabitants to gauge their reaction.

“He got it into his head that he wanted to play it to the Barbary Apes,” recalls Faithfull.

“So at Gibraltar we all got in a cab and off we went to play his music to the monkeys.”

At the time, The Rolling Stones were at the peak of their creative powers. In their early days, the band had relied on cover versions of R’n’B classics for their output.

From 1962 to 1964 it was The Beatles who reigned supreme. John Lennon and Paul McCartney’s songwriting partnership yielded such abundant rewards that they could even donate a single, I Wanna Be Your Man, to Mick Jagger and the boys. It was a gesture that Keith Richards and Jagger credit with kickstarting the Stones’ own surge.

From 1964 onwards, the quality of the Stones’ originally written material was astonishing. As Tears Go By, The Last Time, Time Is On My Side, Satisfaction, 19th Nervous Breakdown, Get Off My Cloud, Let’s Spend the Night Together, Paint It Black, Mother’s Little Helper, She’s A Rainbow – the body of singles the band released is unsurpassed in the history of rock and roll music.

But now in Gibraltar, Jones was preparing to introduce a new audience to his more avant-garde repertoire. It was the first time he had played the record outside of London’s IBC Studios.

“We approached the troop of monkeys very ceremoniously,” Faithfull recalls .

“Bowed to them and told them we were going to play them some wonderful sounds.”

The Barbary Macaques were about to hear a super-group creamed from 60s musical royalty.

Jones had assembled some of the era’s most talented musicians to play a menagerie of instruments including jew’s harp, banjo and horns. Small Faces drummer Kenney Jones was recruited. The Yardbirds’ Jimmy Page stroked his guitar with a violin bow.

“Brian had this guitar that had a volume pedal, he could get gunshots with it,” recalls Page. ”There was a Mellotron there. He was moving forward with ideas.”

With the 60s counterculture and flower power in full bloom, such aural innovations were de rigueur. Sergeant Pepper’s Lonely Hearts Club kaleidoscope of sounds was just three months away from exploding into the world’s consciousness.

But to Jones’s dismay, the music he had prepared for his lover’s new film was seemingly not appreciated by the Rock’s ape population.

“They listened to all this very attentively, but when Brian turned on the tape recorder, they didn’t seem to care for it,” recalls Faithfull.

“They seemed alarmed by it and scampered away shrieking.

“Brian got very upset. He took it personally. He became hysterical and began sobbing. Anita and I had been on this trip for many, many hours and we were in another place altogether.”

With Jagger and Richards providing the vast bulk of the Stones musical output, Jones’ original material was marginalised in the band.

In his current fragile state, the Barbary’s rejection was a shattering blow.

“He screamed at the monkeys, trying to get them to come back, and then when they wouldn’t, he began to revile them in terrible language,” said Faithfull.

“It was awful. And then he began to weep. A kind of madness, shouting, “The monkeys don’t like my music!”

Two hours later, the trio departed the Rock with their nerves frayed. To calm them all down, Faithfull read out Oscar Wilde’s Salome during the flight from Gibraltar to Tangier.

The fading Jones was on an irrevocable downward spiral, culminating in his death at the age of 27 in July, 1969. The guitarist was found drowned in his mansion’s swimming pool.

The soundtrack to A Degree Of Murder became Germany’s entry at the Cannes Film Festival.

The album was never officially released, denying the world the opportunity to hear Jones’ only solo album.

But scamper up the Rock today and you’ll meet the descendants of a few of the album’s only audience.

This article first appeared in Gib Rocks, a new quarterly magazine published in conjunction with the Olive Press – Winter issue due out in November

Staff Reporter - 7 Dec, 2022 @ 11:53
What is the best time to submit a medical school application? The first two weeks of June, just after applications open, are the best time...