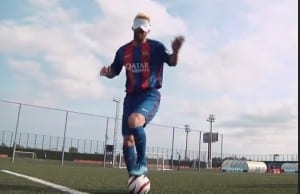 LIONEL Messi and his Barcelona teammates have taken on Spain’s Paralympic blind 5-a-side football team before they head to Rio.

Wearing blindfolds, the blaugrana stars were shown how to kick and control the ball, which makes a noise when touched.

Unsurprisingly, Messi tucked away a spot kick as the teams drew 1-1 in a penalty shootout.

During the Paralympics, Spain lost 1-0 to China and Argentina with a game against Mexico yet to be played.