FEARS of a ‘disaster’ are growing in Torremolinos following several fires that have been started by squatters in an abandoned hotel situated right next to a petrol station. 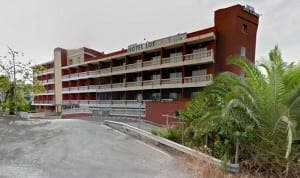 Hotel Los Alamos has seen squatters repeatedly enter the site and strip it of its furniture, copper cables and doors.

But despite its owners sealing the entrances after various police raids and around 20 arrests, squatters continue to raid the building and vandalise it with graffiti, while the past few months have seen several reports of small fires.

“The petrol station is a stone’s throw away from us and there could be a disaster,” said one concerned resident, “I don’t understand why they don’t renovate the building and put it to some use.”

The hotel closed in 2014 after its parent company Summa Hotels went into liquidation, and it has been the property of the Madrid government’s social security department ever since.

There have been proposals to turn the site into welfare or pensioners’ residence and the Costa del Sol Si Se Puede Political Party has requested the building be handed over to the Torremolinos council, however the Town Hall is powerless to enforce such plans.

The Madrid social security department’s provincial office in Malaga has since sent several reports to the head office but there has failed to be any decision on the building’s future, although it was claimed in April that the government owners want to auction the building.