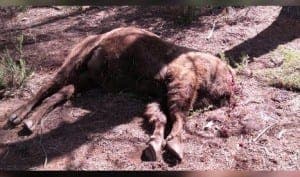 A SECOND bison has been found decapitated in on a reserve in Spain after another suspected poisoning.

The death was similar to that of Sauron, the dominant male whose decapitated body was found on the same Valdeserrillas reserve just a week earlier.

A spokesman for the reserve, based in Valencia, said: “Either it died of a natural death, or it was poisoned before being decapitated by an axe.”

It is believed the animals’ heads may have been removed to keep or sell as trophies.

Police have launched an investigation.