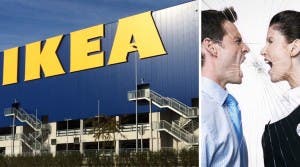 EVEN knights of the realm (my ex-boss, as it happens) are at risk from the Ikea Effect.

I refer to ex-Daily Express editor Sir Nicholas Lloyd, whose journalist wife Eve Pollard admits to many a marital meltdown while shopping in the Swedish Lego-for-adults store.

“I never go with my husband without rowing … about going there, parking, walking through the store trying to find everything and getting out again,” she says.

I thought it was only the Flatpack Challenge that frayed tempers (psychologists have dubbed one piece The Divorcemaker because marriages are almost as likely to fall apart as the unit itself, during the tricky assembly process).

But since Dave and I lost our Ikea virginity in Jerez, I know where she’s coming from.

Our own relationship is approaching the dreaded seven-year watershed and Dave wasn’t itching to go.

But after a stop for coffee and brandy (only one chupito, officer) and the promise of a sherry lunch in El Puerto de Santa Maria, he was almost looking forward to it.
Panic set in when we saw the sheer scale of the beast. Not quite as humongous as Ikea’s flagship store in Stockholm, the size of 10 American football fields, but getting there. It lured us in with free gifts – a stubby elf-sized pencil and a miniscule order sheet – then flicked us up into its gaping maw with its blue escalator tongue.

Now I know what Jonah felt like when the whale swallowed him. Trapped! Passageways that look like escape routes merely recycle you deeper into the windowless maze.

The one-way system might well have been designed on the large intestine of some mythical Norse monster, forcing you forward and counter-clockwise in what Ikea calls ‘the long, natural way’.

Dave needed the loo and was gone eons. “It’s miles away at the bloody end,” he panted, when I found him on the point of collapse in bedding. Ten per cent of babies in Europe are conceived on an IKEA bed, but Dave wasn’t in the mood for love.

As for copying down un-spellable Scandi names and coded numbers longer than Donald Trump’s bank balance onto a flimsy scrap of paper with a Lilliputian pencil … even when balanced on the arm of a Sodderhamn sofa using a set of Imbjudande placemats to rest on, it’s a right pain in the butt.

The cabinet I chose had no name or number tag and turned out to be a hybrid of three, requiring special instructions spewed out by a computer. There were reams of component parts and an ill-omened 13 types of screw.

In the warehouse, a cardboard box city with aisles as wide as New York streets (and an equally scary standard of trolley driving), we were screwed. One part was out of stock! And the checkout lines were longer than the Gibraltar queue.

Happily, Dave and I are still together, and so is the cabinet. But it was touch and go when we had to survive Ikea all over again in Málaga for the missing piece.

It’s somewhat ironic that a store promising to ‘make a house into a home’ provides a shopping experience that’s a relationship wrecking ball waiting to swing.

Of course, if you are contemplating divorce, it’s a fast track not unlike the Islamic way of doing things in some countries.

INTERVIEW: Meet the Ikea manager who is helping develop a new Silicon Valley in Malaga on Spain’s Costa del Sol