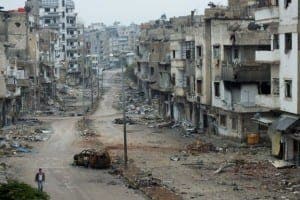 SPAIN and France have drafted a resolution calling for an immediate truce in the Syrian capital of Aleppo.

The resolution calls for an end to military flights over the city, where more than 250,000 people are besieged by Syrian forces.

The draft then threatens ‘further measures’ – diplomatic code for sanctions – for any party that breaks the truce.

“We consider that this is our responsibility to do absolutely everything we can do, everything humanly possible to unite the Security Council behind our efforts to end the martyrdom in Aleppo,” France’s UN Ambassador Francois Delattre said.

Russia, who supports the regime in Syria, has already shot down the draft, rejecting any grounding of aircraft and questioning the viability of a truce.

Russia’s UN Ambassador Vitaly Churkin said the international community should be grateful for their involvement in Syria as the ISIS flags ‘could be flying over Damascus’ by now.

“The primary goal of Russia in that part of the world, in Syria and Iraq, is to throw out the terrorists,” said Churkin.

“As long as the terrorists are there, there will be no peace and quiet for the civilians, in eastern Aleppo or anywhere else.”