THE trial of 37 former high-ranking officials and lawmakers from Spain’s Partido Popular has begun today.

Spanish media have labelled it the ‘trial of the year’ as three former party treasurers are among the accused.

This includes Luis Barcenas, who is said to have stashed tens of millions away in Swiss bank accounts.

The PP itself has also been called to the stand for allegedly benefiting from illegally obtained funds.

It will not face criminal charges but may be forced to pay the money back. 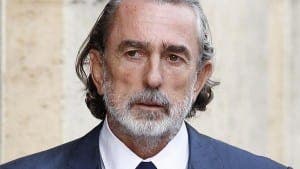 The ‘Gurtel’ label is a German translation of ‘belt’ or ‘correa’ in Spanish, which is the surname of the alleged leader of the corruption network.

Francisco Correa is accused of showering PP lawmakers and councillors with bribes between 1999 and 2005.

It is said his or his friends’ companies would in return be given contracts for public works or organising events.

This included the papal visit of Pope Benedict XVI in Valencia in 2006.

The trial has begun at Spain’s National Court in Madrid and is expected to last several months.