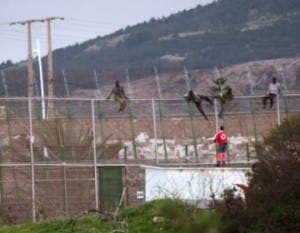 ALMOST 70 migrants have broken free from a detention centre in southern Spain.

Five police officers were left injured when 67 migrants made a break for it from a centre in Murcia.

When medical staff and police officers arrived, they were attacked by inmates wielding knives and fire extinguishers.

Some 37 have since been caught, the other 30 remain at large.