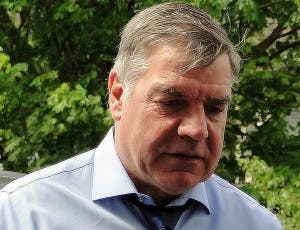 The 61-year-old is lying low on the Costa Blanca following a newspaper sting into corruption which caught him bragging about side-stepping FA rules on transfers on video.

In need of a sub, Allardyce shuffled back to his car and returned with his wife Lynne, 61, who had no trouble in withdrawing funds.

Back in the UK, Allardyce is expected to be charged by the FA for ‘bringing the game into disrepute’.

Chief Executive Martin Glenn said: “It is realistic he could be charged.

“It could range from a fine to a ban. That’s what the history shows. That’s for a tribunal to decide.”