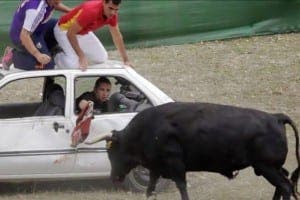 A GROWING 4X4-cum-bullfighting craze has been slammed by animal rights group PACMA.

The Spanish political party released footage of 4X4 drivers chasing after bulls before spearing them out of the windows of the car.

In one clip a bull is shot in the head after being taunted by a number of drivers who surround the animal.

According to regulations by the local government of Castilla-La Mancha – where some of the events are believed to have been filmed – participants are prohibited from being “intoxicated” or “carrying bottles, glasses or any instrument with can cause ill-treatment of cattle”.

“We need to show people that the Toro de la Vega is not the only sickening bull chase in this country,” PACMA president Silvia Barquero said.

“There are more than a hundred of these cruel car rallies in Guadalajara province alone.

“Yet those taking part are blatantly breaking the law.”

She added: “Many are drinking – but under Spanish law people are not allowed to take part in an encierro if they are under the affects of alcohol or drugs.

“The civil guard are normally present but don’t appear to enforce the law.”