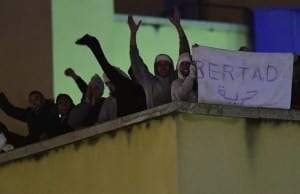 DOZENS of migrants have held a protest at a Spanish detention centre.

Up to 40 migrants climbed to the roof of a Madrid centre to demand their release.

Shouting ‘freedom, freedom’, some of the men blocked security cameras and broke furniture on the way to the roof, according to a town hall spokesman.

“We don’t know the exact number, 30 or 40. They climbed onto the roof and the police are there attempting to negotiate with them,” the spokesperson for Madrid mayor Manuela Carmena said.