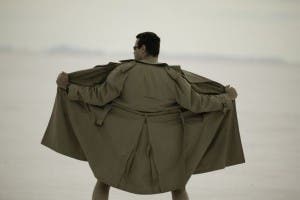 A SUSPECTED serial flasher is on the loose on the Costa del Sol.

A Manilva resident had to call police yesterday morning after a man pleasured himself while staring at her.

The resident, who has chosen to remain anonymous, looked over her balcony in Sabinillas to see what she thought was a man urinating.

“A minute or so later I looked to see whether he had gone and there he was, staring me straight in the face with his penis out giving it a good tug!” she said.

“I moved away from the balcony wall in shock. There’s no mistaking it, I saw him in all his glory in plain sight as he was just below my 1st floor balcony. He made full eye contact with me and carried on with no inhibitions.”

She said she called the chief of police who informed her that this was not the first time such a complaint in the area had been made and that a team of officers had been sent out to look for the individual.

He also said that in his experience this kind of person is ‘highly unlikely to pose a direct threat’ as he likely enjoys doing such things ‘from a distance’.

A Facebook post by the victim has unearthed other possible episodes, with residents commenting that he is well known in the area as a man with mental illness.

One user wrote: “I have seen the same man doing the same thing next to the Chinese shop over the road from Lidl.”

Another worryingly said: “He hangs around near the hotel in Duquesa and stares at the kids getting off the bus, he got completely naked once and took clothes out of the bin and put them on.

“We told the police but they moved him on, but a few weeks later he was back waiting for the kids bus.”

Another questioned why the police described him as unthreatening: “Got to love the police, ‘he won’t be a threat’, he is a threat he exposes himself and does dirty acts!”

The man is described as a tanned and in his mid to late 30s, of stocky build with a round face and an average to fairly tall height.

He was wearing a navy blue and white tracksuit and a baseball cap and has short hair.