THE cross-border ties between Gibraltar and La Linea have always been strong, shaping the very vocabulary spoken in the neighbouring towns.

The effect of Spanish – and other – languages on Gibraltar’s Llanito has been well documented by local historian and cultural expert Tito Vallejo, whose Llanito Dictionary was published in 2000.

Now, a young linguist from La Linea has revealed her own university investigation into the impact Llanito and English on the Spanish spoken in her hometown.

Eschewing the modules on offer in her degree’s final year, she successfully pitched the idea to her tutors of studying the specifics of the language used in La Linea.

Her study looked at how words like nitin (to knit), washi (to wash) and chinga (chewing gum) have found their way into the La Linea lexicon, with their etymology firmly planted in the English or Llanito spoken across the border.

“It is difficult to distinguish where one starts and the other ends,” she said.

“We are Linenses because we have Gibraltarians on the other side, and vice versa.” 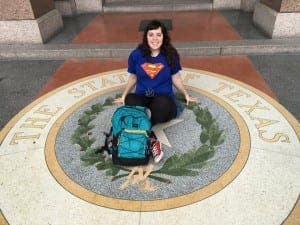 She added: “I wanted to publicise the particularities of our language that is so rich in intercambio words. It’s a shame that the influence of English gets less and less in La Linea.”

For her study, Amusco chose 20 La Linea natives of all age ranges and showed them a number of objects, with older participants more likely to use the English-influenced Spanish word.

The most popular phrases among her participants were carne conbi (corned beef), infleita (bicycle pump) and liquirba (liquorice bar).

She has just returned from a year in a Spanish school in Massachusetts where she taught these unique words to her American students.

“This language was born from the union of two communities,” she said.

“I started working on this believing that many words would have been lost because of the closure of the frontier between Gibraltar and Spain between 1969 and 1982, as well as the effects of globalisation.”

It’s ground that Tito Vallejo has previously covered himself.

Last year, the Gibraltarian printed a Spanish translation of his Llanito dictionary which sold out quickly. It is used by Spanish universities, with Vallejo receiving queries from students of Llanito from as far away as the USA.

He agrees that Llanito has been on the wane since Franco closed the border in 1969.

“When they closed the border there was no more intermarrying,” he told the Olive Press.

“Many words are also now disappearing because children learn proper English in school.”

Nevertheless Vallejo, who is currently writing a book about the history of Gibraltar’s streets, says many Llanito words are still in common parlance.

Place names, too, retain their old names. Main Street is still referred to as Calle Real, Castle Road as La Calle Castillo and the Piazza as El Martillo.

“Many of our words are theirs in La Linea as well,” he said. “They know what we are talking about.”