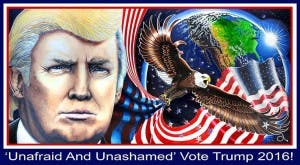 I WANTED to keep this column a Trump-free zone but it’s going to be a hard ask.

A mate of mine was over the moon about the Trump result.

Born in London, my Jewish friend grew up in Marbella and partied hard with me in the 80s.

Then, in the biggest Road to Damascus conversion since Saul, he discovered God, moved to the States and became both an American citizen and a Christian preacher.

He threw himself into Trump’s election campaign in the way that only a newly-arrived immigrant can, talking about the fact that God would vote Trump and that Donald was the only way to save ‘this great nation of ours’.

A gifted artist, he pulled off the even more miraculous task of painting a huge Donald Trump portrait, complete with Stars and Stripes flag and American Eagle, and making him look heroic. Even the toupee had zealous sheen.

Needless to say, since the election I haven’t checked out his social media.

I’m scared that he might be working on a Triumphant Trump Triptych, probably featuring the family, in a bid to become painter to the Court of Donald.

Perhaps it was just me, but when Trump took to the stage to acknowledge his victory with his family, I was struck by the uncanny resemblance of his youngest son, Baron, to both Dameon from ‘The Omen’ and a young Mr Burns from ‘The Simpsons’.

Another old friend from school, now also living in the States, flew over from L.A. It had been a least a decade since she had been in Marbella, and so we organised a mini reunion in a friend’s restaurant.

We were soon all catching up and reminiscing about old days, favourite teachers and events that, for various moral/legal reasons, I am unable to divulge in my column.

Safe to say we were soon rolling back the years and behaving like the big kids that we are, much to the embarrassment of the pre-teens and teenagers that had been dragged to the restaurant by my friends.

It was something of a novel role reversal, with the parents misbehaving and running around the place like four-year-olds on a massive sugar rush, while their kids shook their heads or blocked out the chaos on their mobiles!

Taking a break: Staying in Marbella beats flying to the Maldives, sort of

As seen on TV: Giles revels in his newfound celebrity status after stint on Marbella exposé