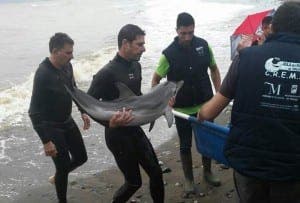 A BABY dolphin was rescued from Estepona beach yesterday morning after becoming lost during the flood chaos.

An unsung hero spotted the calf struggling in the shallow water on the east end of the beach near the Carrefour at around 9am.

He stayed with him for three hours until animal services arrived.

An Estepona resident said: “The man who found the dolphin stranded on the shore got in the water with it and spent three hours with his normal clothes on until people arrived to help.”

The dolphin was reportedly hurt and bruised.

It has been taken by the Centro de Recuperacion de Especies Marinas Amenazadas (CREAM), where it is being cared for before being released back into the sea.