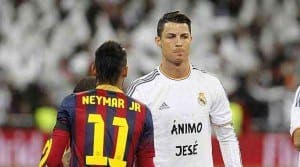 BARCELONA are facing a heavy fine after Cristiano Ronaldo was subjected to homophobic chants during the 1-1 El Clasico fixture with Real Madrid.

The club face a La Liga disciplinary hearing after ‘pockets’ of their 98,000 supporters sang ‘Cristiano come out of the closet’ at the Nou Camp.

While most of the chants were drowned out by whistles and boos from the majority of Barcelona fans, La Liga chief Javier Tebas said the league is likely to take action.

Portuguese forward Ronaldo has been subjected to several instances of homophobia since Atletico Madrid star Koke branded him a f****t during a fixture last month.