THE British referendum and US election results have turned up double trumps for Spain, says the country’s Economy Minister.

Luis de Guindos claims that controversial votes for Brexit and the election of Donald Trump as US President act as a ‘very big advantage’.

He claims that for the first time since Franco, the political microscope has moved away from Spain.

“Spain has a very big advantage now: we are off the radar screen in terms of political uncertainty,” said de Guindos. “This means we can continue to strengthen our economic recovery without the worry of political turmoil.”

While unemployment is still at around 19%, the minister forecasted a 3.2% economic growth for this year – twice the pace at which the Eurozone is expanding.

De Guindos also pointed to a growing property market and an ‘increasingly lively’ startup scene, especially in Madrid and Barcelona. 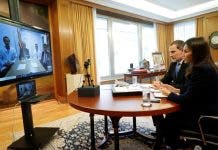 Joshua Parfitt - 8 Apr, 2020 @ 16:02
POLICE have arrested a burglar who broke a window at a nursing home in Valencia. Policia Nacional arrived at...