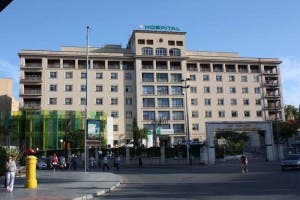 A BRITISH OAP has died after crashing his car into a lamppost on the Costa del Sol.

Believed to have passed out at the wheel, Brooks was heading towards his hometown of Nerja when he careered off the road crashing into a lamppost.

Remarkably, no-one was injured despite Brooks driving across four lanes of traffic.

Firefighters pulled him from the car, however paramedics pronounced him dead at the scene after attempting to revive him.