SAFFRON farmers have made a comeback in Spain thanks in part to the country’s Michelin star chefs. 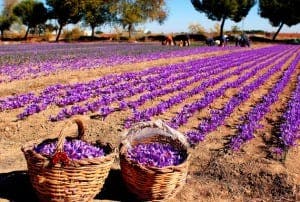 The likes of Daniel Lasa from San Sebastian’s Mugaritz restaurant are said to have made the spice cool again, while changes in the market have favoured the once threatened farmers – who in 2007 were only producing 100kg a year collectively.

“Consumers and the trade are now preferring to pay a little more for saffron which has a better aroma and taste than just something that colours the foods,” said Pat Heslop-Harrison, professor of agricultural genetics at the University of Leicester.

Lasa agrees, and only buys the world’s most expensive spice from its perceived capital of Castilla-La Mancha.

“In Spain we treat it as if it were threads of gold,” he says.

It is so revered that some companies are allegedly using foreign versions and labelling them as Spanish.

“We are not against selling saffron from other countries but we think it is defrauding the consumer not to specify clearly the origin of the product,” said Manuel Navarro from the Spanish Association of Saffron Producers.

There are currently 267 saffron producers in Spain who distribute to the US, EU and the UAE, with an average 10-hectare farm capable of producing €50,000 worth of saffron per year at €500 per kilo.