I DON’T use them often but in the 22 months I’ve been living in Jerez de la Frontera, I have never encountered a bad tempered taxi driver. That has to be unique. Without exception, the ones I’ve ridden with have been calm, friendly and helpful. 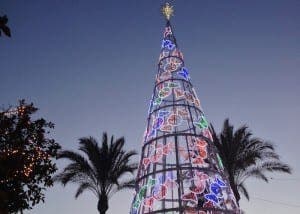 Not that they have much to get stressed about. There’s virtually no such thing as a traffic jam here. The closest it gets to it is around 1.30 pm, when the shops and businesses are closing for the afternoon and people are eager to get home for their lunch and siesta. At that time, the increase in pace and movement is very nearly noticeable. You might even hear the odd horn beep.

But one evening in early December, I was on the edge of town and took a taxi home. It was 7.30 and as we got near my place, there it was in front of us – a proper traffic jam. Well, a line of about 20 or 30 cars anyway. The driver explained that people were heading in to see the Christmas lights being turned on.

I asked him which celebrity they’d invited to press the switch. We had a good laugh about that. Because, apart from some revered kings and queens of flamenco, Jerez doesn’t really do celebrities. In fact it doesn’t do a lot of things the way other places do.

It’s an extraordinary town. The awful events that happen in the world – and God knows there have been some shockers lately, from Brexit and Trump to Aleppo – seem to simply pass it by, leaving it serene and unruffled beneath the orange trees. 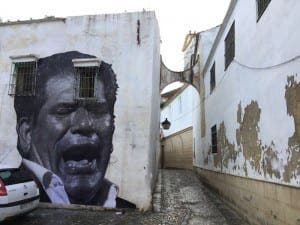 Spain is still gripped by economic woes and, apparently, Jerez has the highest unemployment of any of its cities. Some of the outlying estates are truly grim (you can learn a lot about a town by frequently catching the wrong bus), with as many as 70% of people jobless. But you wouldn’t know it on a weekend in the centre. The markets, the bars, the cafes and restaurants are all packed to the rafters.

I get the feeling that people here are natural existentialists. My guess is, if they have an electricity bill for 50 euros and 40 euros in their pocket, they’ll say sod it, let’s go for a beer and a plate of chicharrones. 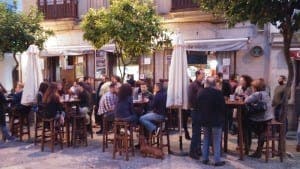 They love their food and even more their drink. As the world centre of sherry production, this town was literally built on booze. But unlike the UK where I’m from, the carousing rarely gets edgy or violent. The drunker they get, the more they just laugh, sing and clap flamenco.

Flamenco is the constant soundtrack here. Like a heartbeat, it’s everywhere you go, in bars, in shops, in the street. Much more than just a tourist attraction, it’s a fundamental part of the place’s DNA, a formative element in its cheerful, soulful character. 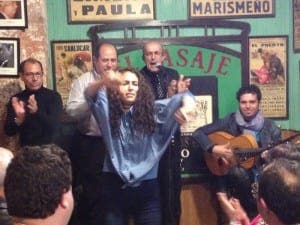 Another reason to cheer is the quality of the food. The notion of a farmer’s market would be unlikely to catch on here, as just about everything in the main plaza de abastos – fish and meat, fruit and veg, herbs and spices, wine and cheese – is local, fresh and beautiful.

You can buy a big mackerel caught that morning off Cadiz, a fillet steak, some spuds and greens, a litre of decent wine from the barrel and a bag of lemons and parsley, for 10 euros the lot.

It’s just as well it’s cheap because (finally getting to the point of this blog) building this house has completely cleaned me out. Broke. Skint. Potless. It went way over budget and took much longer than planned, which added to my expenses. 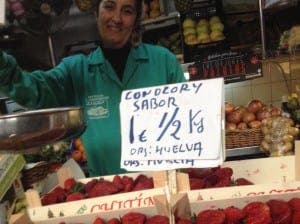 I owe my brother some money and I still haven’t paid the builders the final two grand of their bill, although they’ve been amazingly pleasant and relaxed about that. They appreciated the fact that, when I realised the penny jar was emptying, I called a halt to the work instead of letting it – and the bill – run on. But as a result, quite a few projects are presently on hold.

The costliest item, a glass ceiling for the big upstairs space at the back  (which I’m still not sure what I’ll do with) has not been done. The concrete floors haven’t been polished and sealed. The space for a dishwasher remains vacant. The useless second hand fridge and washing machine I bought, in an attempt to save funds, will stay useless until replaced. There are no blinds on the windows.

But I’m living here. I’m in good health and I’m happy. Since moving in I’ve bagged an editing job, working from home. It doesn’t pay a fortune, but it’s enough to get by, pay the debts and even finance the unfinished work in the next few months.

Above all, it’s amazing to think that – touch wood – I’ll never have to pay rent or a mortgage again. It’s even more amazing to look around and realise that this wonderful place, born of my own ideas, is done. I did it. But more, much more than this, I – hang on, I’ve just had an idea for a song.

PS: If my misadventures haven’t put you off, Jerez is a great place for a house building project. The council has a list of properties that are up for auction. Typically, you could buy a beautiful old house with 250 square metres and a courtyard for around 50,000 euros or less. It would need a ton of work to fix it, but local labour is relatively reliable and cheap.

Rafa, my architect and project manager who has now become a friend, would be happy to help you all the way through the process. You can contact him here: http://www.iniestanowell.com/en/contact/