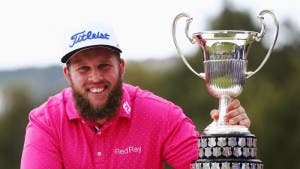 ANDREW Johnston has revealed how he was told his beard was ‘bad for golf’ after winning the Spain Open.

The 27-year-old Brit – who after winning the Major said he couldn’t wait to ‘get hammered’ – revealed how fans criticised him for his now-signature facial hair during a BBC Radio 4 interview.

“When I won in Spain, I was going to get rid of it that week,” he said, “then on social media I got a few messages saying, ‘Your beard is bad for golf, it’s a bad image.’
“Then I was like, well, I’m going to keep it now.”

Affectionately known as ‘Beef’, the young player has become a favourite among the golfing crowd after seemingly coming out of nowhere last year.

“I guess I’m just really down to earth, and at the end of the day, I’m just a normal guy who happens to play golf. I’m no different to anyone else.”

He signed a lucrative deal with US sandwich chain Arby’s at the end of last year, and will wear their logo on his shirt during tournaments.

Joshua Parfitt - 18 Jan, 2022 @ 14:15
LEARNING a language is a lot like spraining an ankle: it's painful and takes ages to get better. But every language learner will hit a...