A BRITISH expat has called in police after finding five of her dogs executed in a late-night massacre.

First reported by the Olive Press last week, the Guardia Civil are now investigating the horrific attack that also left one of Illona Mitchell’s horses with its eye gouged out.
The detectives from the environment section Seprona told Mitchell, 48, that it was one of the worst attacks they had seen and were visibly shocked by it.
They have put on extra patrols to keep an eye on the estate at weekends and at night.

“I am sickened as to why someone would carry out such a cruel and barbaric attack on innocent, defenceless animals,” she told the Olive Press last week.

The mother-of-one, who bought her estate in mountains near Granada in 2004, found the five rescue dogs shot in their pens on January 6, the night of the Reyes (Three Kings).
Her beloved seven-year-old Dizzy, ‘one of the friendliest dogs you will ever meet’ and a puppy called Maisie were shot dead at the gates of their pens.
Meanwhile Coco and Domingo, were shot in their beds, with Mitchell believing they had cowered in their kennels before being killed in cold blood.
Coco, two, had been shot at point-blank range between the eyes, while three-year-old Domingo was shot through the side of his face. 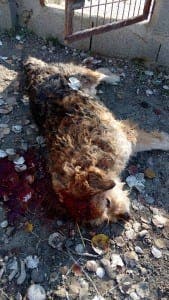 They later found Jack, a six-year-old German Shepherd, having convulsions under a nearby tree, but despite being rushed to the vets he died 30 minutes later.
An X-ray showed he also had a bullet shot through the roof of his mouth.

Meanwhile, one of Mitchell’s 12 horses was also attacked, so savagely that its eye may have to be removed.
Vets have been struggling to treat the four-year-old, named Rocco, because he has become too nervous and skittish.
Deeply traumatised by the attack – that thankfully was not seen by her daughter Ella, 11 – Mitchell continued: “I am so angry that someone would do something as disgusting as this to innocent animals.”

Mitchell, from Chester, believes the attack is linked to her recent decision to ban hunters from her huge 173-hectare estate that sits in stunning scenery in the Sierra de Baza.
“The only motive I can think of is hunters getting revenge,” she said. “I recently stopped hunting on my land, and made this clear to all local hunting groups.
“It has led to me receiving harassment from local hunters calling at my house.
“They have also stopped me in the street, hurling insults and intimidating me.”

She hired a solicitor after reporting a number of these incidents to the local police and town hall of Caniles in the previous months.
She believes the attack was planned on a night when the police would be extremely busy with it being Three Kings Day and a national holiday the next day.

Only three dogs survived the attack while one remains unaccounted for.

Ella has been extremely upset by the incident.

“I’ve had trouble sleeping since,” she told the Olive Press, “I get such feelings of anger, how could you look an innocent dog in the eye and shoot it? I just don’t get it.”
A series of reward posters to try and catch the assailants are going up around the area.
Animal charities and rescue centres have been offering help, as have the general public via a crowdfunding page, to help pay for the vets’ bill.