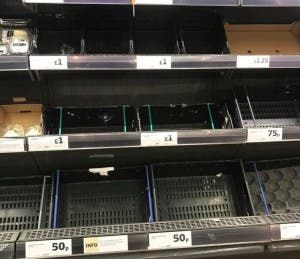 Signs have appeared limiting the number of items shoppers can buy, amid fears prices could sky-rocket.

There are fears that the shortage could spark a European trade war, with Britain battling France and Germany for the scarce stock.

The deficit began with a ‘courgette crisis’ in January, but has since spread to aubergines, spinach, rocket, cauliflower, peppers, cucumbers, tomatoes, lemons and oranges.

Morrisons, Tesco and Lidl have rationed lettuces to three per customer in stores across the UK.