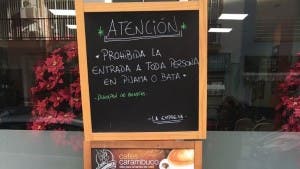 A MALAGA bar has ruffled feathers in the neighbourhood by banning pyjamas from its premises.

Los Monaguillos has prohibited customers from entering in sleepwear, for ‘hygiene reasons.’

A sign outside the bar reads: “Attention. No admission to anyone wearing pyjamas or  dressing gown.”

While a summer ban on entering in swimwear is usually well-accepted, this recent decree has created some controversy.

Some customers have stopped coming to the bar, saying that they should not be judged or barred from entry on the grounds of their clothing.

It has become common for locals to be seen wearing pyjamas, dressing gowns or slippers on the streets in the area.

Staff at Los Monaguillos said that several tourists had assumed there was a hospital close by, to account for the unusual number of customers wearing sleepwear.