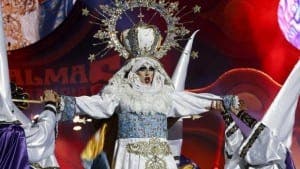 CATHOLICS in Spain have been left outraged after a drag queen performed as the Virgin Mary and danced to Madonna’s ‘Like a Prayer’ at the Las Palmas Drag Gala competition during Carnival.

The performance, by Nelson Rodriguez (aka Drag Sethlas), has provoked an embittered debate, and at its centre is Bishop Francisco Casas, who accused Rodriguez of ‘frivolous blasphemy’.

The enraged bishop went as far to say that the incident had left him sadder than he had been on the day of the Spanair crash which killed 154 people in 2008, a comment which has upset some of the victims’ family members.

He said: “(There is) Respect for freedom of speech but there is also respect for legitimate religious feelings.

“We have the right to be respected.”

Bishop Casas called for a mass to be held on Friday, and Broadcaster TVE have since removed footage of the performance from its website.

In his defence, Rodriguez said: “There was no intention of offending anyone. It was simply something people wanted to see.”

The carnival runs from February 19 to March 5, and has been celebrated over the past five centuries, with the Drag Gala now on its 20th edition.